Orlando Soria started experimenting with his surroundings before he even understood what interior design was. At age seven, he painted his bathroom pink and turquoise, and soon moved on to the rest of his house. He’s been reinventing objects and spaces ever since, from flea market finds to friends’ homes. But it wasn’t until 2011, when he stumbled upon a job and on-screen role as style guru Emily Henderson’s assistant on HGTV’s “Secrets from a Stylist,” that his passion finally became his profession. Fast forward seven years, the Los Angeles-based stylist has designed homes for clients across the country, become an Instagram fan favorite thanks to his humor and unfiltered voice, and recently published his first book, “Get it Together!: An Interior Designer’s Guide to Living Your Best Life.”

On the surface, it seems like he’s had no problem getting it together. That was far from the truth 18 months ago, when both passion and profession betrayed him. He lost his job just after his partner ended their long-term relationship, leaving him depressed and scrambling for a new place to live on a budget. Not so easy when you’ve just spent the last three years pouring yourself into building a life — and a dream home — with someone else. 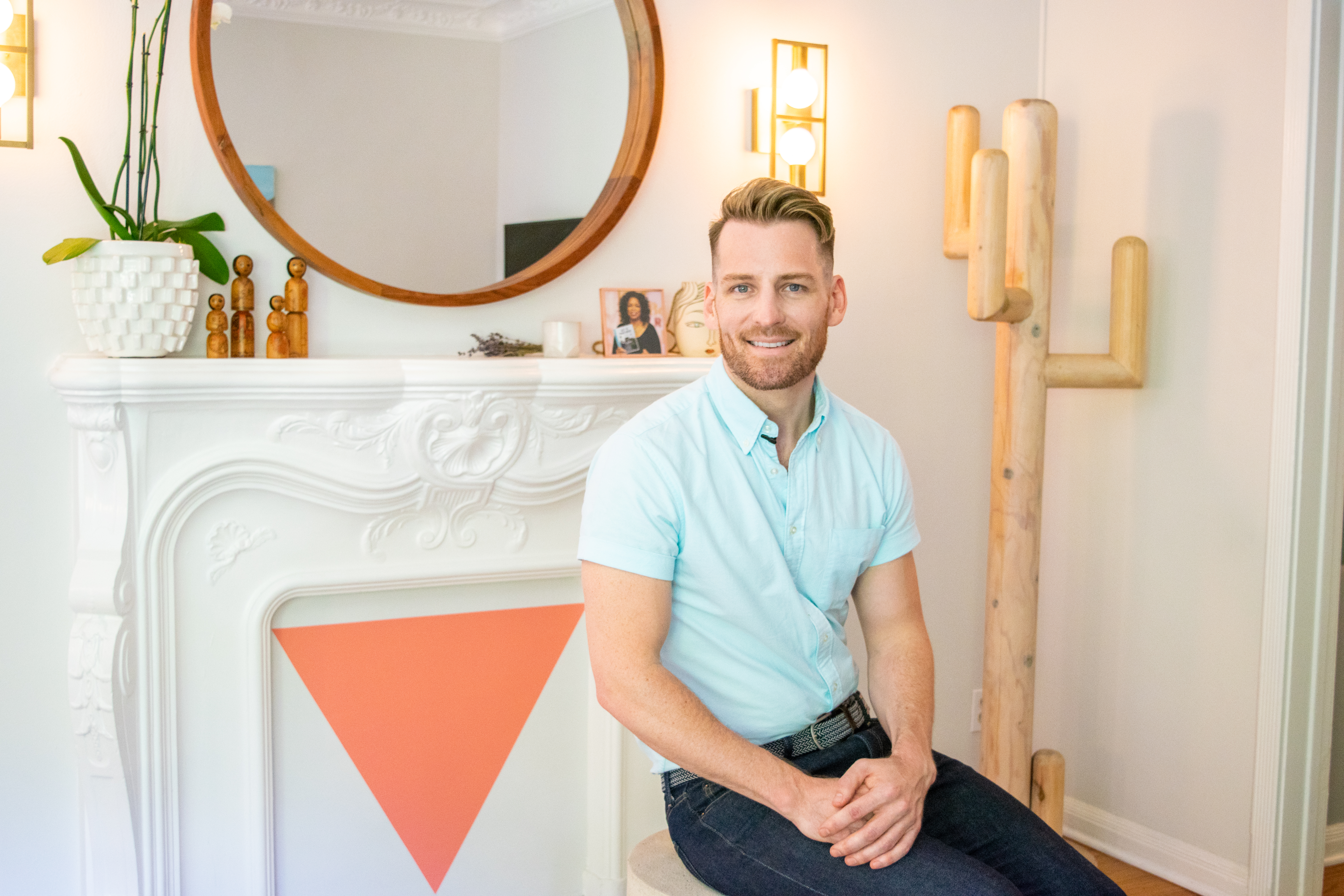 You know what they say about life and lemons, though. Something about renting a French chateau-style apartment in West Hollywood, repainting the “dingy, butter-yellow-beige” walls, replacing the outdated wrought-iron lighting, and completely gutting and redoing the kitchen, all while rebuilding the rest of his life. At least that’s what Orlando did. Through heartbreak, he seized the opportunity to experiment with a completely different style from the sleek, modern condo he shared with his ex.

“I see designing a space as a way to create a beautiful, well-organized palette where you can live your life,” Orlando explains. “It might not seem like something that should be a priority during a stressful or sad time in your life, but it’s a way to show care and respect for yourself. You’re making your space beautiful because you think you deserve it.”

Orlando channeled his devastation into a cozy, old-meets-new-school apartment with a “California eclectic” style that is unapologetically his own. From the peacock blue velvet sofa to the bold pink triangle painted in the fake fireplace (a tribute to ACT UP, a gay rights movement), every design choice was solely up to him. Read on to see how Orlando built a new home in “Chateaulando,” a post-breakup sanctuary that helped him get it together again. 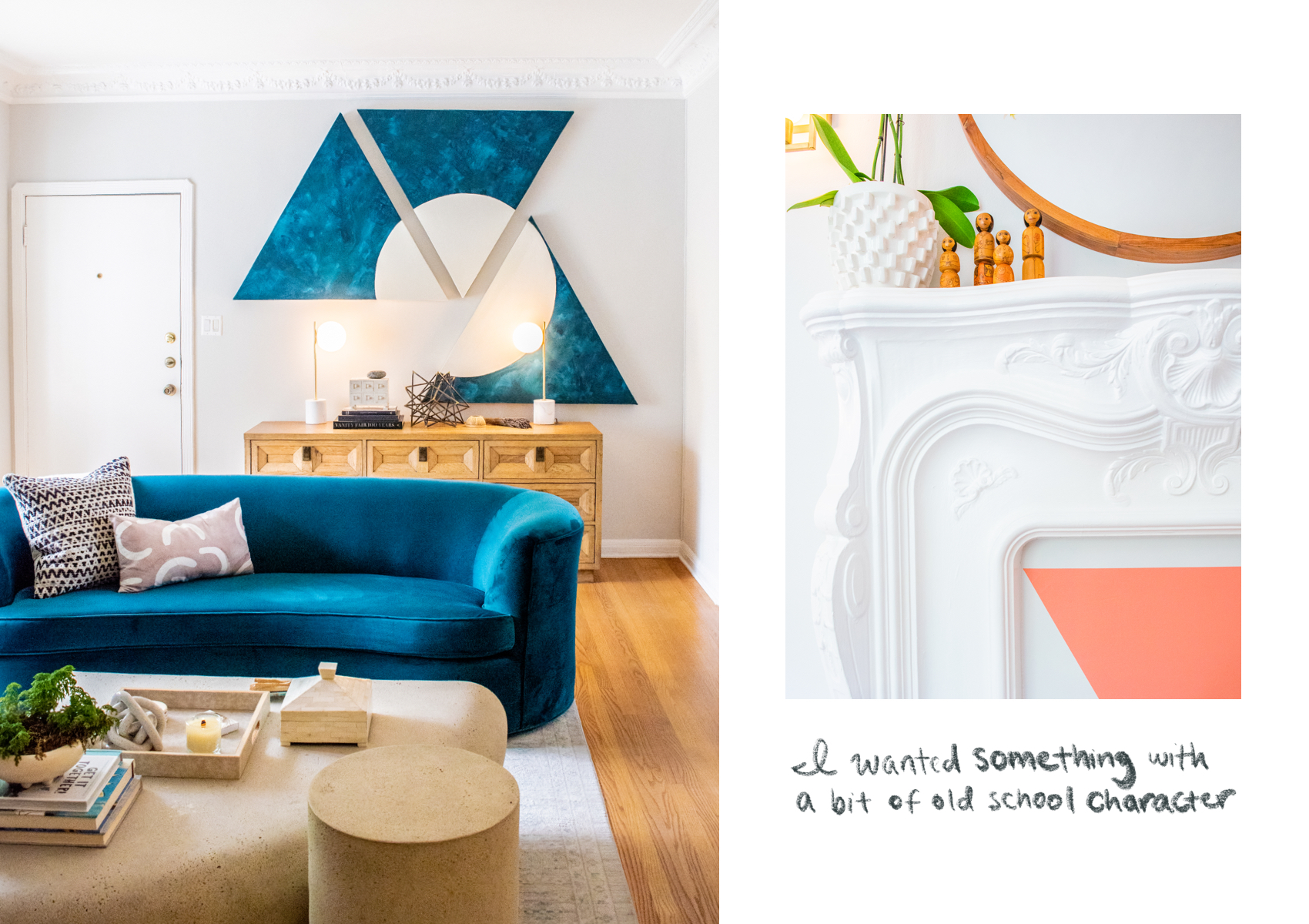 While the apartment building was constructed in the 1920’s, the unit was a jumbled mess of 1980’s tile and mid-century cabinetry when Orlando first found it. Rather than ignore the building’s origins, he decided to juxtapose the traditional space with contemporary items to balance age and character with crisp lines and fresh design. The sleek blue couch contrasts nicely with the living room’s original crown moldings, while the bright Roman shades (hung by a Tasker) add a pop of color to the traditional white kitchen. 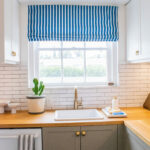 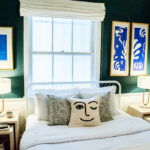 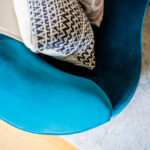 “I don’t ever think that designing your space and making it beautiful for yourself is a waste of money,” Orlando says. Even though he rents his apartment, he’s upgraded the space in budget-friendly ways.

“There are so many small details you can change that aren’t necessarily permanent that will make a huge difference to what it looks like,” he says, pointing to lighting, wall color, and hardware and fixtures as easy upgrades with a big visual impact. The woven IKEA light fixture in his bedroom, for example, adds warmth and character without breaking the bank. 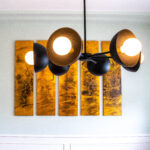 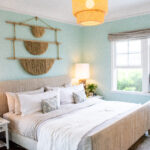 The art of the matter

“Without art this wouldn’t be home,” says Orlando. “That’s what gives this place its character.” He grew up in a home filled with Japanese art (a tribute to his mother’s childhood in Japan) and later studied art in college and grad school. The walls bear many of his own pieces, including a DIY piece over his bed made completely from hardware store items and a series of turquoise circle and triangle paintings in the living room and bedroom. (His love for circles and triangles matches the amount of O’s and A’s in his name.)

Even the kitchen backsplash sports two quirky paintings by artist Hey Sosi. “Yes, you can hang art in your kitchen,” Orlando says. “Choose lightweight pieces, use foam tape, and there you go.” It’s an unexpected but simple way to add personality to the room. 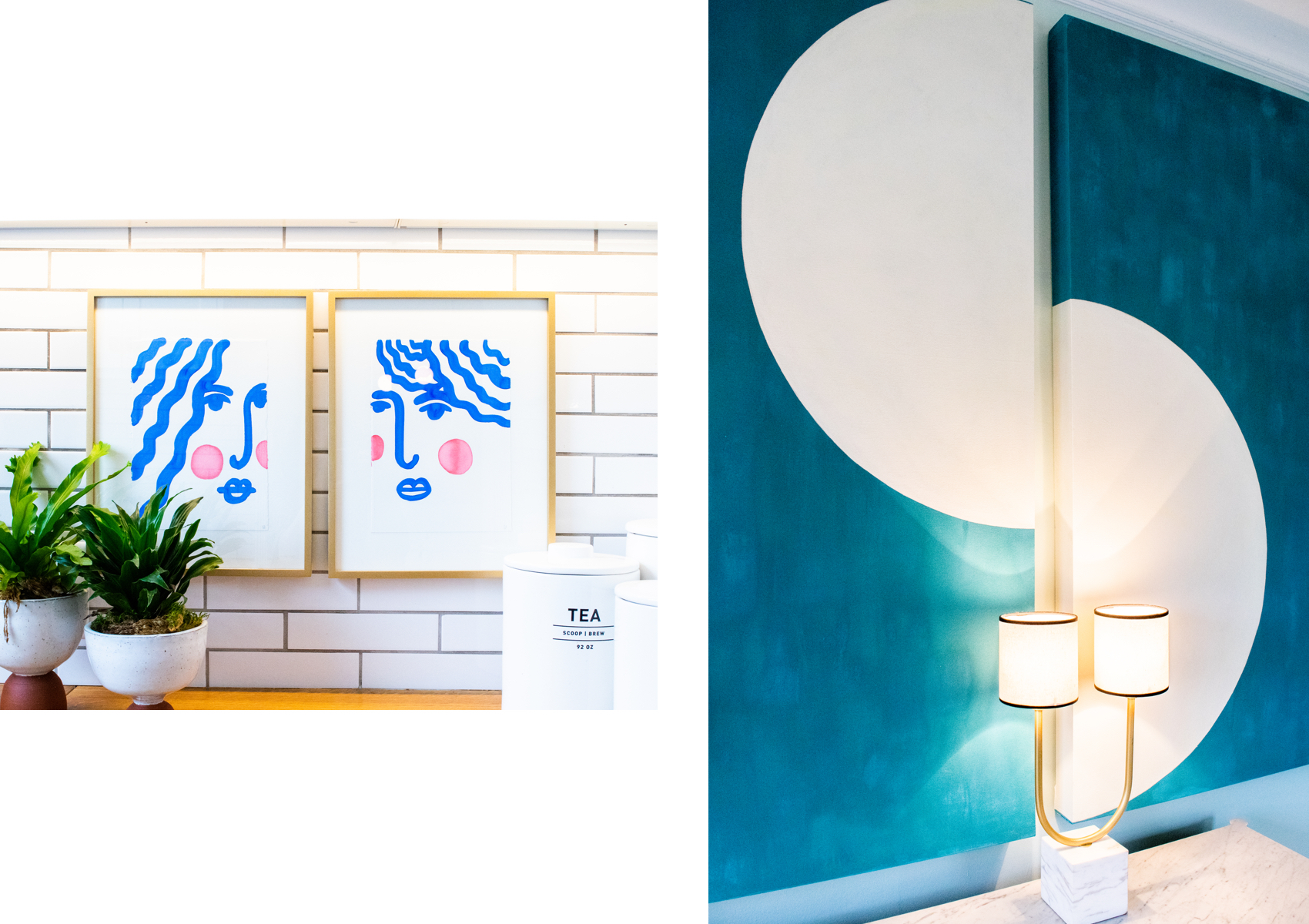 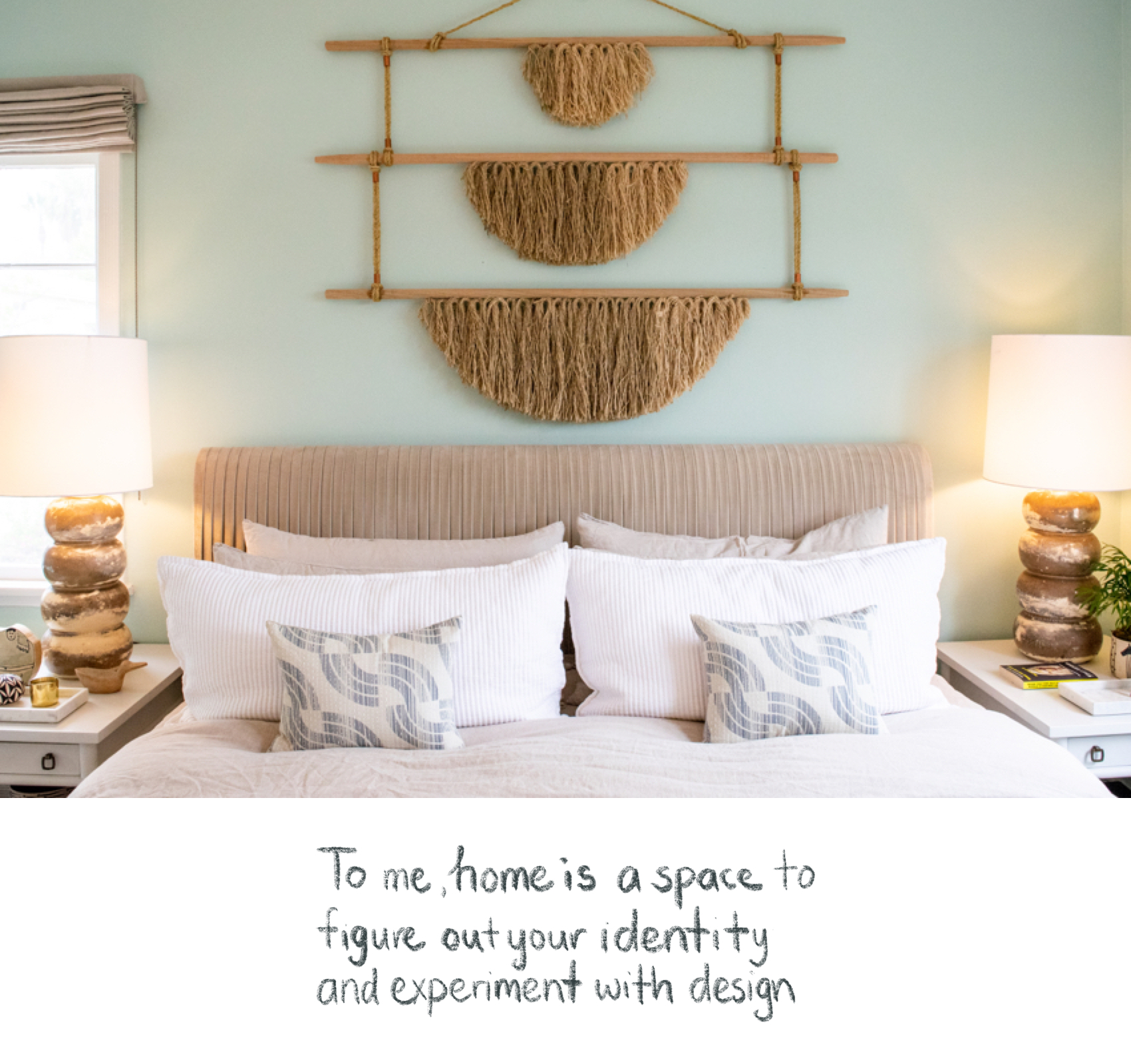 Home is in the details

While Orlando’s goal was to start over in a new space, he didn’t completely erase traces of his old life. He’s called many places home over the years, including Yosemite National Park (where he grew up with Yosemite Falls in his backyard), New York, and Philadelphia before LA. Each one has left its mark on Chateaulando.

There’s the wooden cactus “sculpture” (don’t you dare call it a coat rack) that’s followed him from apartment to apartment, which he found in a vintage store in LA and immediately fell in love with it because “it’s so weird and 80’s and Memphis and terrifying.” There’s an illustration of Yosemite and a portrait of actress Anjelica Huston (an idol and former design client) on the guest bedroom gallery wall. There’s Orlando’s most prized possession, a wooden “Fuji pole” adorned with flags and bells that he received after summiting Mt. Fuji with his mom.

“I’ve always played with my space, and I think that’s what has helped refine my style,” Orlando says. “It started off very rugged, and over time I’ve learned things that work and things that don’t. I couldn’t have gotten there without experimenting.” 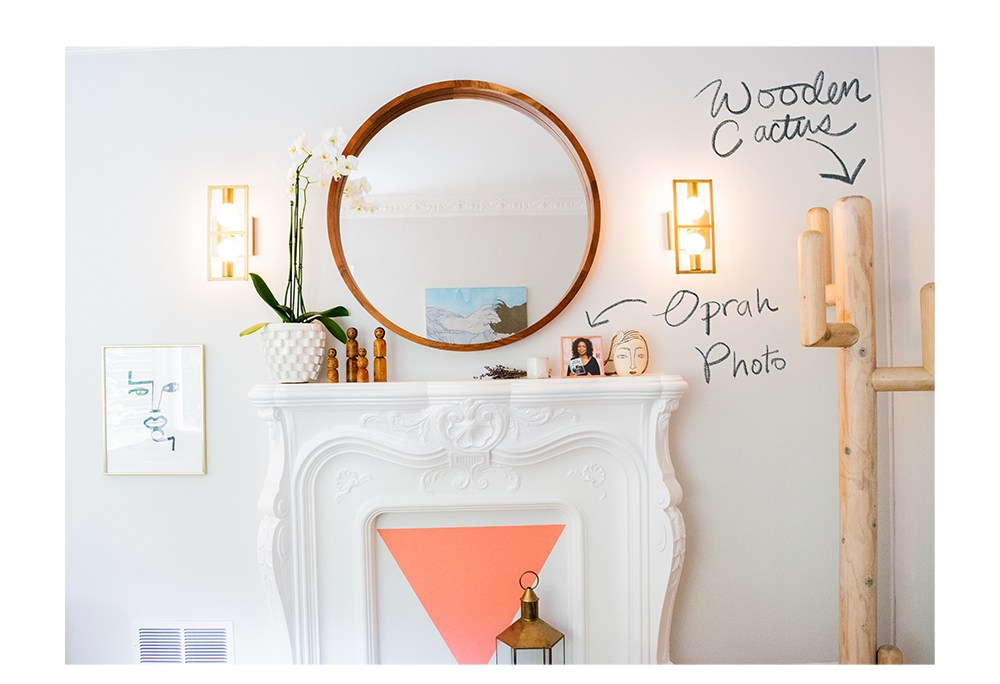 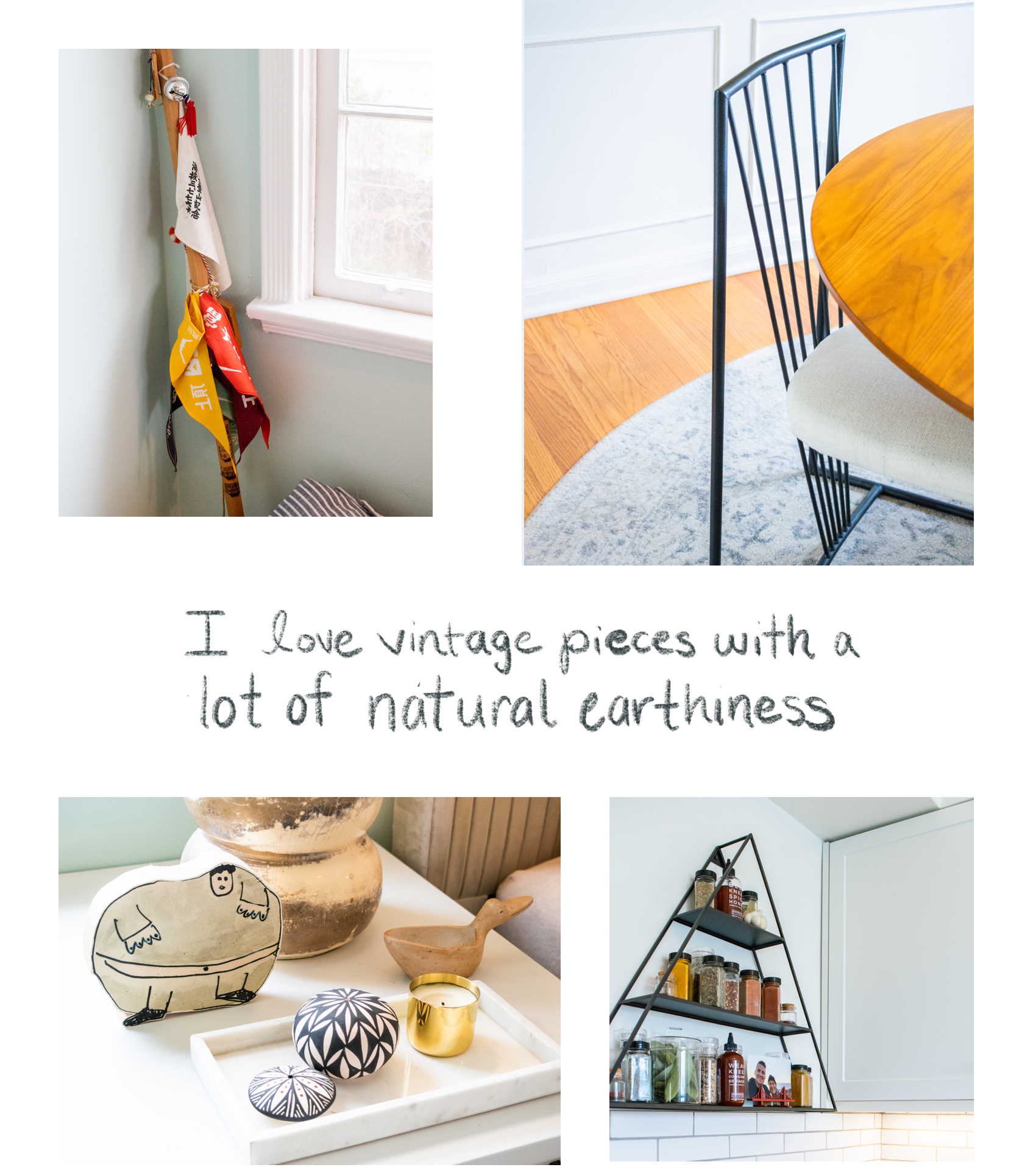 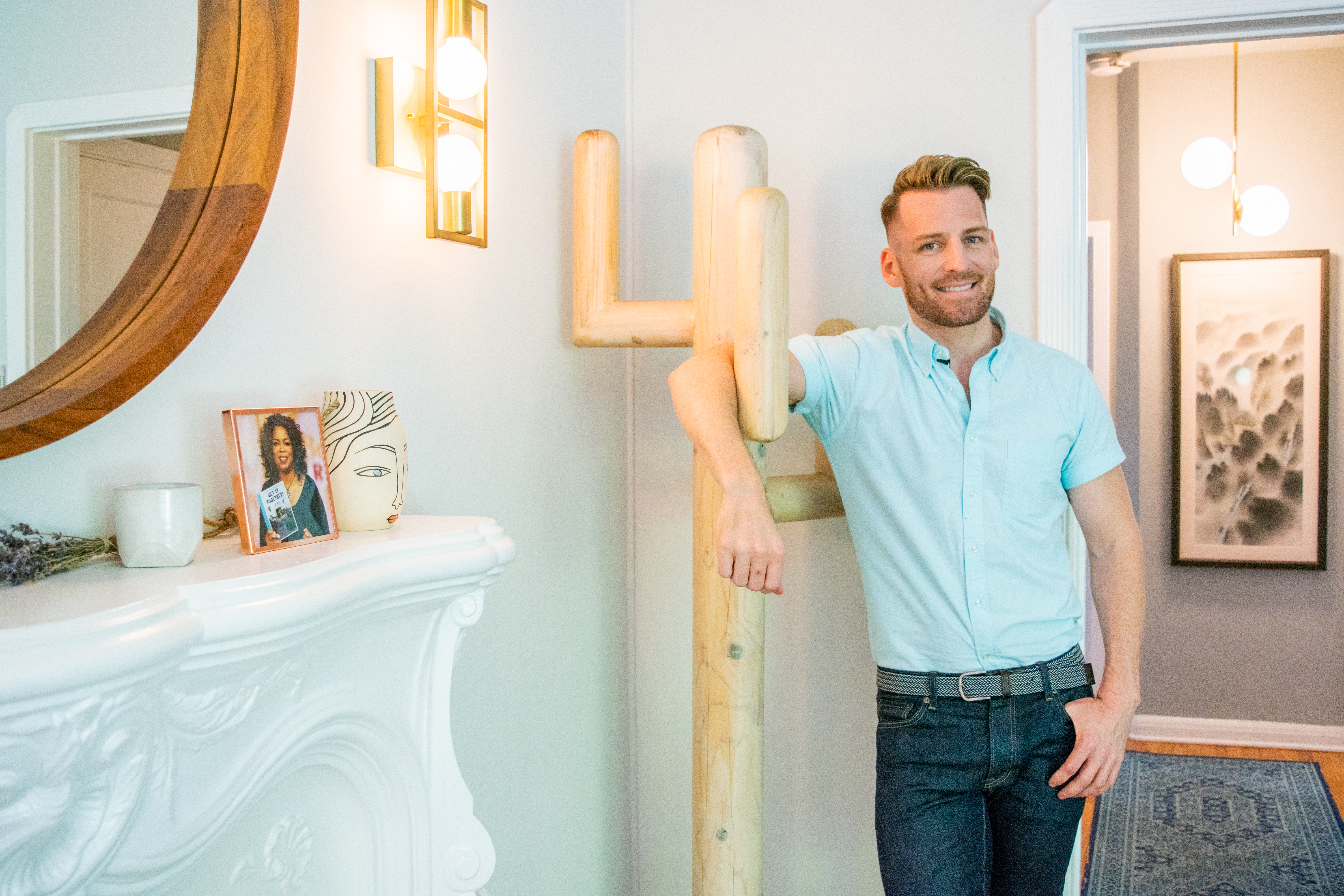