Similarly, if you design a workflow and environment where the path of least resistance results in your desired outcome, you will have no choice but to repeatedly and consistently hit your goals. My workflow has three components:

Focused Physical Context
If there’s too much going on directly in front of you, failure is just an alt-tab away. Here’s what my desk looks like when I’m having trouble focusing:

and here’s what it looks like when I’m being productive: 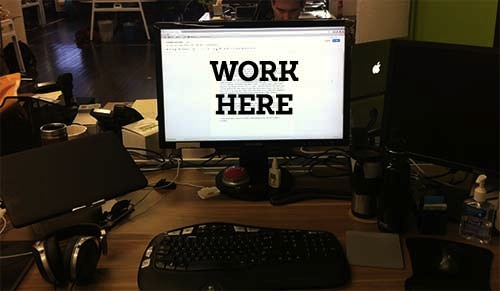 Bottom line? Get rid of anything that can distract you with little more than a glance in its direction.

Serialized Work
If I start my day thinking about the 15 things I have to do, then parts of my brain will work on all 15 until each one is done, leaving a smaller percent of my mind to help me with what I’m working on in the moment. Every day, I decide what I’m going to do that day and the order in which I will tackle the jobs. Then it’s just a matter of clicking them off as I go. Because I trust my system to always tell me what I should do next, I don’t end up thinking about anything but what I’m working on at any given moment.

Delegation and Outsourcing
In reality, no one has 15 things to do; they have 1,500 things to do. While I serialize my task list, I look for things that could be better accomplished by someone else. My capable colleagues can implement marketing campaigns, call customers, and negotiate deals. Why should I hog all the fun? And why not hire a TaskRabbit to pretty up my PowerPoint presentation or run this signed contract over to our attorneys for filing?

Rather than spend all this time working against the nature of the universe, why don’t we just embrace the fact that we will be happier pursuing the path of least resistance? If we start there, then all we have to do is make sure that the path of least resistance always leads to victory. Here are some of my favorite weapons in the war on wasted time: