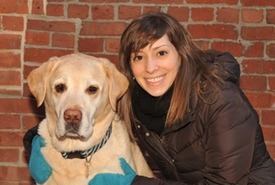 Exactly 2 years ago today (or 63 million+ seconds for the ruby geeks), the idea for RunMyErrand was born.  You may have heard the story before, but it all started with a dog.  A big yellow one.  His name is Kobe, and 2 years later he is our CIO – “Chief Inspiration Officer”.

It was a cold February evening in 2008, when we were out of dog food for Kobe, and came up with the plan for RunMyErrand.  We were meeting my dear college friends at Masa in the South End – Brie, my roommate from Sweet Briar who I hadn’t seen in years, and Jen another SBC alum.  I remember barely being able to contain my excitement over dinner and margaritas that night as I shared our idea with friends.  They were the first to hear about RunMyErrand, and it was wonderful to have their support from the start.

I was still at IBM at the time, and I would have never guessed that two years later, this is where we would all be.  A company launched, funded, with an amazing team (including advisors), behind us.  My house in Charlestown sold – the one we were going to “settle down in” – with plans for a launch in the San Francisco market imminent.  Not to mention a special dog food delivery partnership that solves the original problem that inspired RME!  Craziness!

Reflecting back, I’m not sure I realized at the time, how fast two year would go, and how much work it would be to get to this point.  I myself have learned a ton in this time, expanding my skill set beyond engineering, and finding a passion for entrepreneurship that I realize was always a part of me.  I have never felt more alive.

I am so grateful to advisers, mentors, and new team members that have supported this company, and a very timely update to our team page was just pushed live yesterday featuring then entire RunMyErrand Crew, including our CIO – Kobe.  A celebratory margarita will be made in the Busque house tonight – here’s to the next 31,556,926 seconds ….

ps – You might be hearing from our CIO in the very near future as a guest blogger.  He’s so vain!